Nitro drinks are becoming more and more popular these days. But what are they, exactly? And how do they work? In this article we will discuss nitro infused beverages in detail. We'll talk about what these drinks are made of, and the equipment you need to prepare them. So if you're curious about it, read on!

What is a nitrogen infused beverage?

Nitrogen infused drinks are made by infusing a beverage with nitrogen gas. The nitrogen infusion process gives to the drinks their characteristic thick and creamy texture and it is also responsible for the drink’s bright white color.

The nitrogen gas causes the drink to become foamy, and it creates a cascading effect as the bubbles rise to the top of your glass. Nitrogen bubbles are smaller than CO2 bubbles, and are precisely these tiny bubbles that provides a velvety mouthfeel and silky texture when we consume nitro drinks.

Traditional bubbly beverages are carbonated with carbon dioxide, which produces the large-bubbled hiccup-inducing fizz we know and love from our favorite lagers and soft drinks.

Nitrogen bubbles are 100 times smaller and longer lasting than CO2 bubbles, and this waterfall of tiny bubbles provides a uniquely smooth, velvety mouthfeel. Have you ever had a smooth and creamy beer? Chances are your favorite ale has been carbonated with nitrogen.

Nitrogen gas is also known for its ability to preserve freshness that makes those drinks a great choice if you want a beverage that will stay fresh for longer. 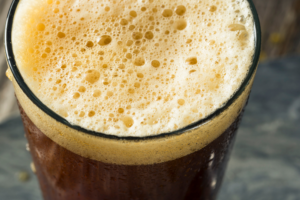 What is the story of nitro drinks?

In 1768 Joseph Priestley, a British chemist, discovered that water could be infused with carbon dioxide to create a bubbly drink. This process is now known as carbonation. The result of his experiment was that water maintained his natural flavor but also had a fizzy sensation in the mouth.

In 1832, John Partridge developed a carbonation machine, considered the first prototype of the machine that is used today for soda bottling, that mixed carbon dioxide with water and other ingredients such as lemonade, tea, or milk.

The first bar that started to sell nitro beverages was the “Odd Fellows Café & Bar” in Austin, Texas. They started serving nitro coffee and nitro cold brew beer in 2013. Since then, many other bars around the world have followed this trend.

Nitro coffee is one of the most popular types of nitro infused beverages. It’s made by infusing cold-brewed coffee with nitrogen gas. The result is a rich, smooth coffee that has a similar texture of a Guinness beer.

This coffee is also a great option if you’re looking for a drink that is lower in caffeine then a regular coffee.

Coffee shops have introduced Nitro tea to their customers since 2017 and now became the preferred beverage of thousands of cafes throughout the world. Beautiful guiltless joy without sacrifice in taste! Tea infused with nitrogen has a good taste and flavor without adding additional sugar.

Nitrogen is a highly sweet-smelling chemical with an excellent taste and offers an effective way to eliminate the need for sugars and carbohydrates. The all-new Nitro Thai Tea is one of the most popular flavors.

Whether you’re a professional bartender or a home mixologist, you can find thousands of nitro cocktail recipes online to try at home or serve to your customers.

There are also different pre mixed cocktails in cans, perfect for bars that want to serve nitro cocktails but don’t have the necessary tools, as well as people who want to create a bar experience at home for a party.

A nitrogenated beer is a sparkling alcoholic beverage made with N2 gas. According to Ball Corporation — who developed Ball’s Widget Inside™ can for RTD nitrogen-infused beverages — more than 95% of beer drinkers, enjoy nitrogen-infused beers.

Nitro beers contain a mixture of nitrogen and carbon dioxide and the main difference between the two types of brew is their bubbles. A typical nitro beer contains about 70% nitrogen (the remaining 30% is CO2), and this gives it a velvety texture and creates that famous “reverse cascade” of bubbles after pouring.

By ordering a nitro beer, in fact, you will be able to witness a “hydromassage effect” created by the bubbles of nitrogen that try to escape from the glass, a container that is neither cold enough nor pressurized enough.

Where can you buy it?

The coffee industry has changed rapidly over the past few years, and baristas and coffee shop owners are constantly striving to create new and unique coffee drinks. There are several places where nitro beverages are available.

The United States, Canada, the United Kingdom, and Australia are just a few of the countries that have embraced nitrogen infused drinks. In each country, you can go to your local coffee shop or bar and order them.

The nitrogen infused drinks are also sold in cans and bottles in grocery stores. The cans and bottles are just like a normal canned/bottled drink but they include an additional nitrogen widget that contains a small amount of liquid nitrogen, which is released into the can when it’s opened.

You will need just enough equipment in your business to start making Nitro Coffee. It only requires the keg, the gas nitro and the in-house nitrogen infusers. The nitro coffee box can handle the caffeine without rusting.

You can also make nitro drinks at home, but it’s not easy because you need specialized equipment. First of all, you will need a nitrogen canister – these canisters are used to dispense nitrogen come in different sizes.

Is nitrogen safe to drink?

Nitrogen gas is a colorless and odorless inert gas that makes up 78% of earth’s atmosphere. It is non-toxic and has no negative side effects when consumed in nitro cold brew coffee or tea.

Nitro Coffee is a good product with hardly any sugar and offers a healthier alternative to your daily caffeine intake.

Many people load up their drip coffee with cream and sugar, which makes it unhealthy. By infusing beverages with nitrogen, the need for added sugar or sweeteners is reduced, as the gas naturally exerts a sweet flavor.

As with carbon dioxide, nitrogen does not produce acidity, thus eliminating it from a beverage’s flavor profile. This also makes nitro drinks a better choice for those who suffer from acid reflux or stomach problems when drinking carbonated beverages.

Nitro drinks are also great for vegans and those who suffer from milk sensitivities such as lactose intolerance. Coffee shops offer a variety of dairy alternatives, including almond milk, soy milk, and coconut milk.

Buy the complete Smartwhip system here and create your own molecular gastronomy dishes. Visit our recipes page and find a range of recipes on culinary foams, rapid infusions, cocktails and much, much more for inspiration.